This content is researched and written independently of the views or opinions of Online Will Makers' editorial team. Online Will Makers may earn a commission from purchases of products featured on this website. Full disclosure available here.

What is a Holographic Will?

Everyone knows that a last will and testament is an incredibly important document in a person’s life. But many people still put off creating a will or don’t take the process of making this document seriously. Some of this is brought about by our reluctance to face our mortality but many people are also influenced by movies where characters often simply scribble their last will and testament on a piece of paper minutes before they die. Thus, a large proportion of the population believes that they can write a will by hand and it will be considered legally valid. But are these handwritten wills allowed under US law? We will answer this question in our article and explain what should be included in a holographic will to make it legally valid.

Definition of Holographic Will

A holographic will is a Last Will & Testament created entirely by the testator. In other words, it’s a will created in the absence of witnesses. Most testators create a conventional will. However, other testators, facing their end, often express their last wishes by drafting a holographic will.

Imminent death forces people to write the vast majority of holographic wills. For instance, the Guinness World Book of Records recognized a Czech man as having the shortest will in the world. Sick for weeks, he realized his death was near. He wrote Vše ženě (or everything to wife) on his bedroom wall before passing on.
Or consider the case of a Saskatchewan farmer. In 1948, a tractor accident left him dying beneath his rig. With his remaining energy, he scrawled a message that read, “In case I die … I leave all to the wife…”. Saskatchewan courts probated the metal panel and determined it to be a valid will. So, there is no specific format or a template to write a holographic will. Any format could be recognized as valid.

Is a Holographic Will Legal in America?

What Should Be Included in a Holographic Will? 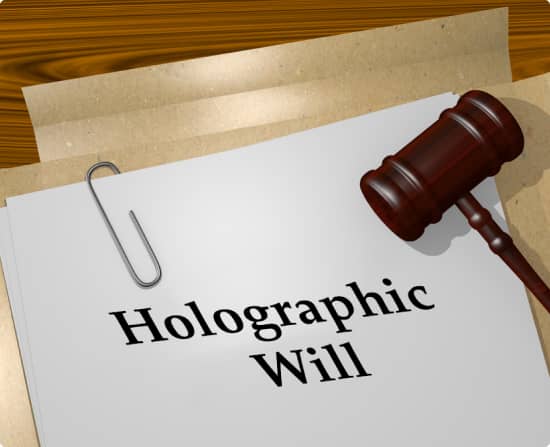 Creating a holographic will t’s not hard at all. In fact, many people, not knowing how to create a proper Last Will & Testament, already have holographic wills. To create a legitimate holographic will, a testator must prove they created it. They can satisfy this condition by doing it in their handwriting, and signing it.

Second, the testator must have the intellectual ability to write the will. If the testator isn’t a legal minor, courts presume this condition to be true, absent evidence to the contrary.

And third, the testator must wish to distribute their estate to a beneficiary or beneficiaries. It is recommended to include their names and addresses and specify what each beneficiary gets in detail. Their intentions must be clear, or the courts might not accept the holographic will to be valid.

Holographic Will Disadvantages and Risks

There are many risks associated with holographic risks that conventional wills don’t carry. First of all, you may forget to include certain elements in your will (such as forgetting to name a will executor). This can either render your will invalid or cause issues for your loved ones. For instance, if you forget to name a will executor, the probate court will usually appoint someone instead of you and your family members may be unhappy with the court’s decision.

Secondly, since holographic wills are usually created in the absence of witnesses, it may be difficult for the court to ensure the validity of your will. With conventional wills, witnesses can be called to testify about the testator’s behavior and state of mind.

It can also be challenging for the court to ascertain that the will in question was indeed written by you and that you intended the document to serve as a will. For instance, people who want to challenge the document may claim that you were simply taking notes or that you changed your mind and created another will later on.

And the biggest issue with all of these problems with holographic wills only come to light after the testator’s death, so there is no way to go back and fix them.

We advise strongly against it. First of all, holographic wills aren’t legal in all jurisdictions. But even if they are, the courts can easily rule these documents to be invalid. One of the most common tripping points – handwriting. If a judge determines that the testator’s writing is illegible, that’s enough to invalidate a holographic will.

Secondly, a lack of clarity regarding beneficiaries can derail a holographic will. Like a conventional will, a testator’s intent must be clear. If it isn’t, the courts can strike down certain provisions.

Individuals should only write a holographic will if it’s an emergency. If a testator has significant assets or dependants, they should already have a conventional Last Will & Testament in place.

Don’t forget that you can easily make a will online these days. We have reviewed the best online will makers and summarized all the pros and cons for each, so you can make your decision quicker and easier.

All in all, we believe that holographic wills are outdated, unreliable, and should only be used in circumstances when the testator doesn’t have any other options. In all other cases, we recommend using an online will-making service to create a legally valid last will and testament online in as little as 15 minutes.